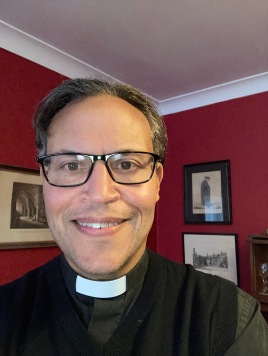 The Feast of the Epiphany of our Lord takes us back to the crib. On Christmas night it’s angels who sing out the praises of God and shepherds who leave their flocks to come and worship before the Christ-child. At Epiphany it is a star shining in the heavens that proclaims this most special of all births, and mysterious visitors from a far-off Eastern land come seeking a king—and find him, and kneel before him, but not where they’d expected…

Today we get another look at the Christ-child. We’ve moved on since Christmas, it’s 12 days later. This isn’t a picture frozen in time, and anyone who has experienced a child’s development will know how rapidly they grow. Mary still nurses this child Jesus but she also needs to be able to put him down and get on with the tasks of daily living. That’s our calling too: that as we return to routine, perhaps with some New Year’s resolutions, we do so ready for the new growth of Christ in us.

And when we look at the child growing in the Christmas crib, we’re aware that we’re not the only onlookers. This is the day of that disturbing visit by the Magi. When not in lockdown, this is usually the time of year when we are most likely to encounter those people we see only rarely, perhaps just once a year… And the Magi come out of the blue, or at least those mysterious lands which are called simply “the East”. The truth is we don’t know where they came from really, how many they were or who they were. “We three kings…” fits well in the carol, but the number “three” is the number of the gifts: gold, frankincense and myrrh, rather than of those who bear them.

As for their being “kings”, “Wise men” is probably a bit better as a translation, but you might also call them philosophers (people trying to find meaning in what they observe). These days they might describe themselves as “consultants”, and their specialty as consultancy to royals and heads of state. Their journey takes them first not where God might intend but to Jerusalem. If the star is about the birth of a “king of the Jews,” then for them the obvious place to offer their services is in Jerusalem.

There is never a shortage of good advice where money is to be made. Is this what they hope to offer when they tell Herod they have come to pay homage to the new-born king?

Herod himself says that he would like to do likewise if the Magi can find him—but we know his motives are far from well-intentioned. And we don’t really know why these mysterious visitors from the East made their journey…

Except we can say that they found what they needed, even if it wasn’t what they had expected. Not in a capital city but in an outlying village… Not in a grand palace, but in what was at best a modest home… And not one who bore the appearance of a King’s son, but true royalty in the child whose first crib had been an animal’s feeding trough. In the palace of King Herod, the Magi had come with questions and received only partial answers from scribes searching through scriptures. But now, as they find the Holy Family in a humble Bethlehem dwelling, they are simply “overwhelmed with joy”.

What they thought they knew with their heads is now revealed to their hearts. The dignity they bore with their wisdom has to be put off so they can find the truth in humility, kneeling in worship before Jesus. As we see the glory of the Christ-child revealed to them, so we can worship beside them as fellow-Gentiles, people called from afar by the love of God which beckons us. As we see them offer their gifts of gold, frankincense and myrrh, we can make our own offering to Jesus of our hearts and lives.

Then, they leave. They rejoice at what they have seen, but we know that the darkness of the world is closing in as Herod plots to remove the threat he perceives to his kingship. It’s a foreshadowing of the injustice and the violence which we know quite well in today’s world. The Magi recognise in the child of Bethlehem the one they call “the king of the Jews”. The next time that phrase will be used by Gentiles in St Matthew’s Gospel is almost at its end, by the Roman soldiers who crucify Jesus. At his birth and at his death Jesus is seen for who he truly is. The invitation to us today is to perceive his glory also.

Remember that Christian discipleship means working out our faith in daily life, seeking the simplicity of faith in the complexities of the world, and recognising and knowing God’s love even when appearances deny it.

Donate to All Saints

To view and order prints by Richard Rayner click here

Visits to our site